REVIEW: THE QUEEN OF NOTHING (THE FOLK OF THE AIR #3) BY HOLLY BLACK 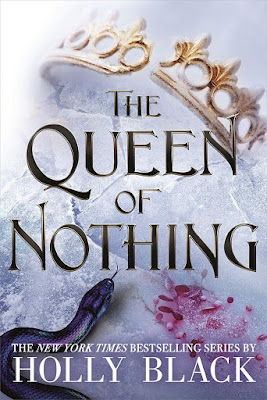 He will be the destruction of the crown and the ruination of the throne.
Power is much easier to acquire than it is to hold onto. Jude learned this lesson when she released her control over the wicked king, Cardan, in exchange for immeasurable power.
Now as the exiled mortal Queen of Faerie, Jude is powerless and left reeling from Cardan’s betrayal. She bides her time determined to reclaim everything he took from her. Opportunity arrives in the form of her deceptive twin sister, Taryn, whose mortal life is in peril.
Jude must risk venturing back into the treacherous Faerie Court, and confront her lingering feelings for Cardan if she wishes to save her sister. But Elfhame is not as she left it. War is brewing. As Jude slips deep within enemy lines she becomes ensnared in the conflict’s bloody politics.
And, when a dormant yet powerful curse is unleashed, panic spreads throughout the land, forcing her to choose between her ambition and her humanity…

The Queen of Nothing is the third and final installment in The Folk of the Air series and it was a blast. Holly Black gave me everything I needed from this trilogy and I am totally satisfied by how it ended.

“I am the Queen of Elfhame. Even though I am the queen in exile, I am still the queen.”

This book continues from where the Wicked King left off, with Jude in exile and Cardan being out of her grasp and taking charge of the realm of Elfhame. From the first pages, we get to know more about Cardan’s past and the prophecy foretold at his birth, which explained why he was treated so badly by his father, siblings and even his own mother. Meanwhile, Jude is trying to readapt to living with her sister Vivi and little brother Oak, in the mortal world but her heart is full of longing for the faerie realm. Still reeling from Cardan’s betrayal, in her mind she’s plotting how to get back to Elfhame. And when her twin sister Taryn comes begging for her help, she decides to go back to Faerie and confront everything head-on, including her feelings for the High King.

“It’s magic I long for, magic I miss. Maybe I even miss being afraid. I feel as though I am dreaming away my days, restless, never fully awake.”

I absolutely enjoyed how this book developed. Things get really intense, a war is brewing and everyone involved lays their cards on the table but it doesn’t mean that there is no more scheming involved. We get to see the true nature of every character in this book and how they ended up in the position they were in.

“All power is cursed… The most terrible among us will do anything to get it, and those who’d wield power best don’t want it thrust upon them.”

Cardan has been my favorite starting from book one and it was such a delight to see his character arc evolve so beautifully. The way he expresses his feelings for Jude without waiting for her to profess it back had my heart melting. He has become a true king of Faerie, one that cares about more than the crown, one that wants his people to truly love and respect him.

“It's you I love," he says. "I've spent much of my life guarding my heart. I guarded it so well that I could behave as though I didn't have one at all. Even now, it is a shabby, worm-eaten, and scabrous thing. But it is yours."

Jude has also grown a lot throughout the series. I didn’t quite like her in the beginning but by the end I loved her strength and ability to adapt to any hard situation and emerge a victor. The tender moments between her and Cardan were sizzling with chemistry and passion and I was deeply happy to see them come undone in each other’s arms.

“I missed you," I whisper against his skin and feel dizzy with the intimacy of the admission, feel more naked than when he could see every inch of me. "In the mortal world, when I thought you were my enemy, I still missed you."

I tried not to race through this book because I didn’t want it to be over too quickly, I didn’t want to part ways with these characters just yet. The ending was perfect for a trilogy that kept my heart racing through each chapter. I could finally take a moment and breath and enjoy how things turned out. So overall, I enjoyed this series, it was a rollercoaster of emotions and I would love if the author would make a spin-off, maybe about Jude’s sisters or her brother Oak.

“Maybe it isn't the worst thing to want to be loved, even if you're not. Even if it hurts. Maybe being human isn't always being weak.”
Etichete: 5 stars Cardan Enemies to Lovers Fae Fairy Fantasy Holly Black Jude Review Romance The Queen of Nothing YA fiction