What happens when the stalker finds his prey?
Obsession, darkness, and madness unravels. All wrapped in intense passion.
Rina Kent & Isabella Starling join forces to bring you mayhem!
Pre-order the highly anticipated Hate & Love duet.
He Hates Me releases on April 9th with the conclusion
He Hates Me Not releasing April 23rd. 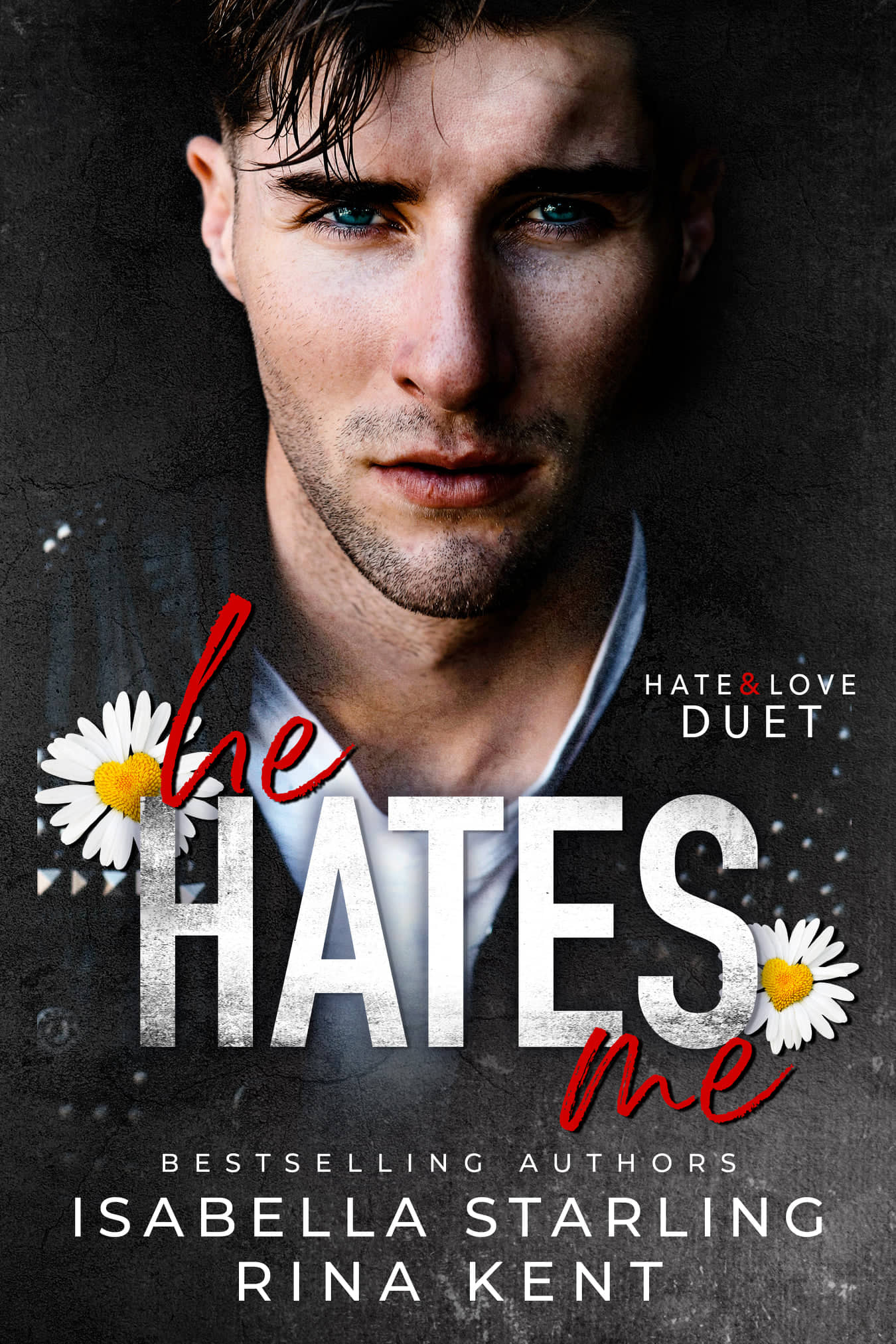 Once upon a time, there was a monster. When the night falls, he comes out to harvest souls. He’s silent and invisible —no one notices when he strikes then retreats to the shadows. Our paths shouldn’t have crossed, but they do. One day he sees me. Then he can’t unsee me. Once upon a time, there was a monster, a killer, a devil. My stalker.   He Hates Me is part of a duet and is NOT standalone. The entire duet will be released two weeks apart. 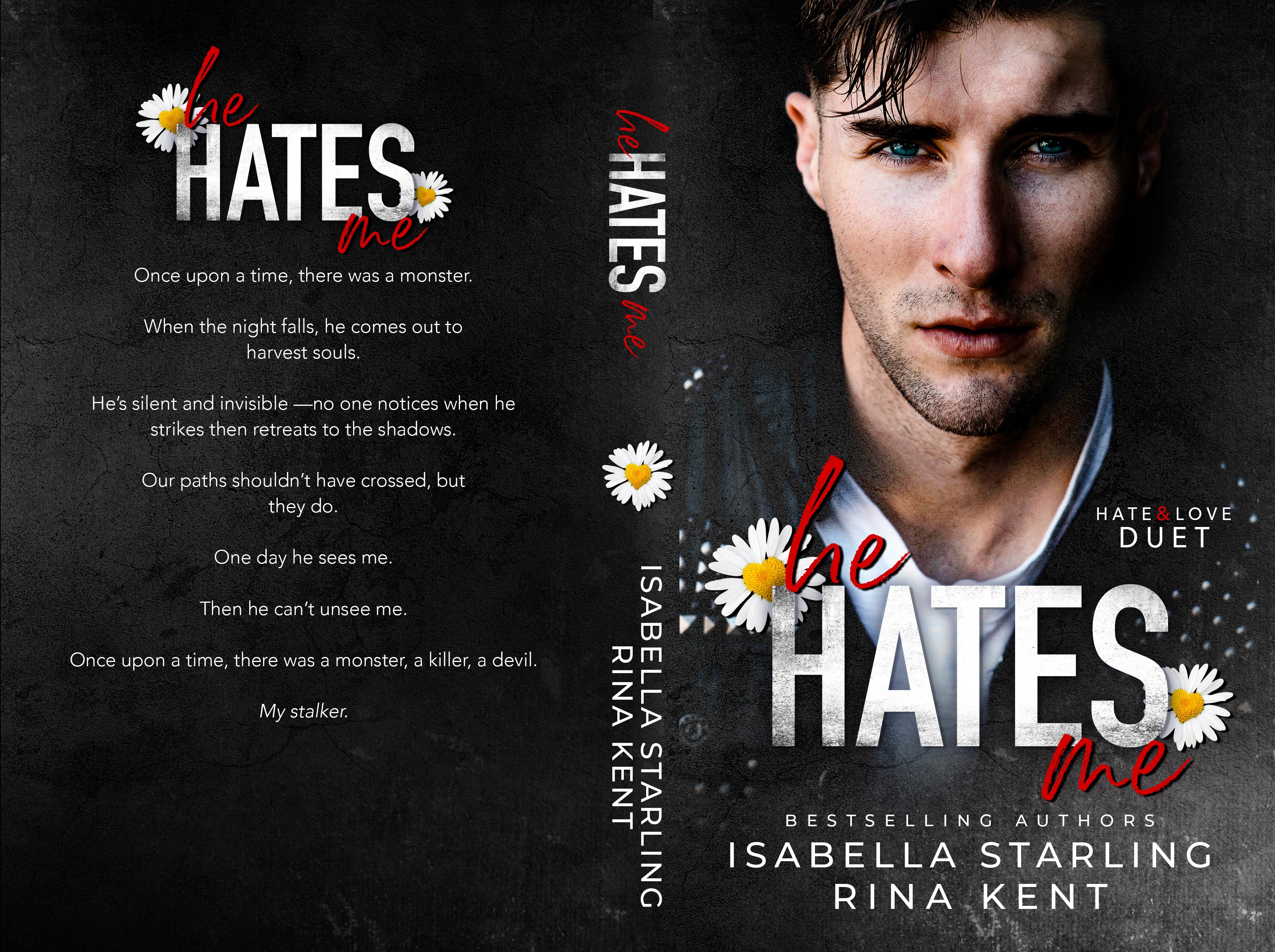 
He Hates Me Not 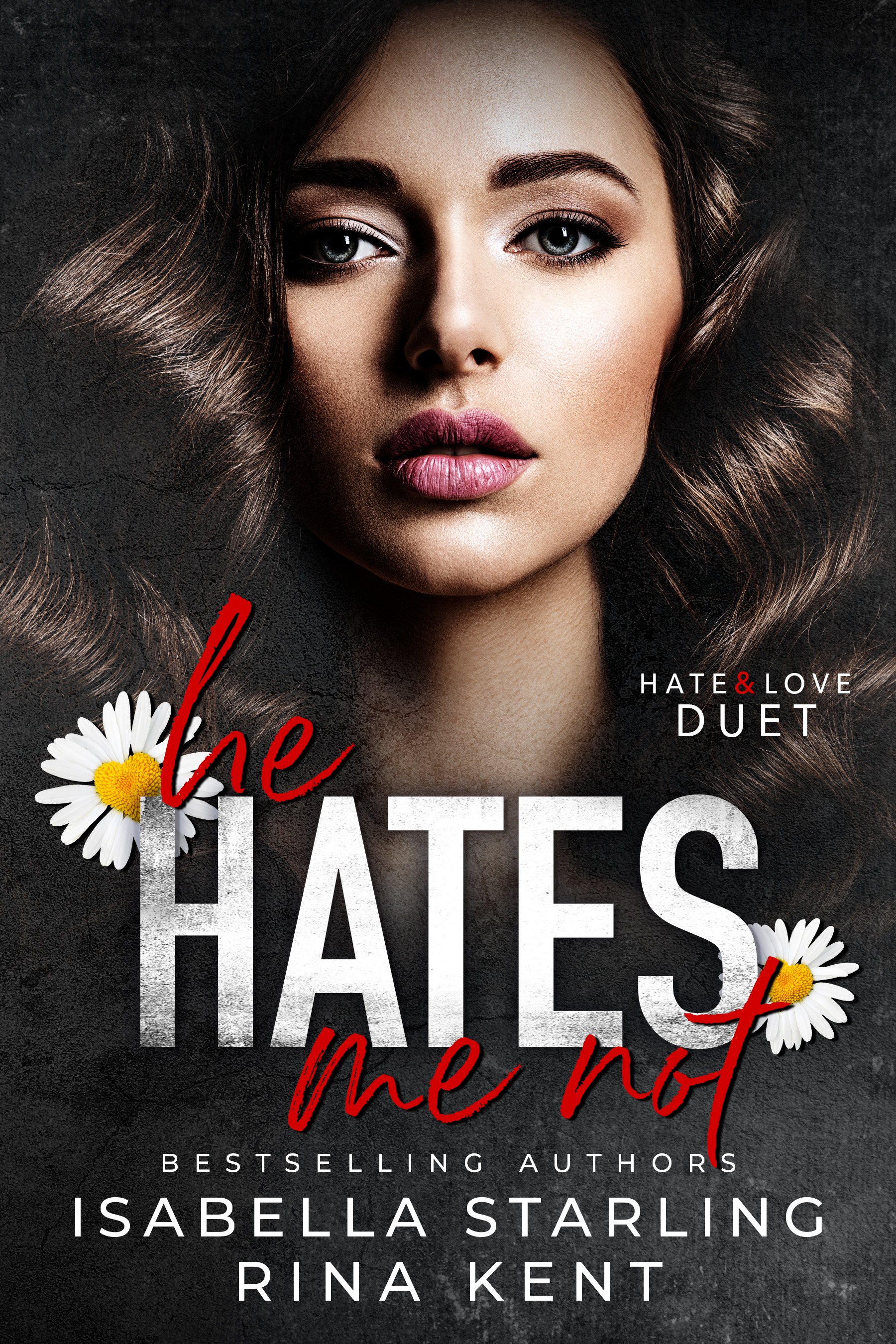 Once upon a time, there was a girl. She hid secrets and scars behind a blinding smile. Until I decided to confiscate that smile, watch it, trap it, own it. She calls it an obsession, a madness, but she’s seen nothing. The moment I noticed her, her fate was sealed. Then she became a key player in my unhinged game. Once upon a time, there was a girl, a liar, a fraud. Mine.   He Hates Me Not is the second part of a duet and is NOT standalone. 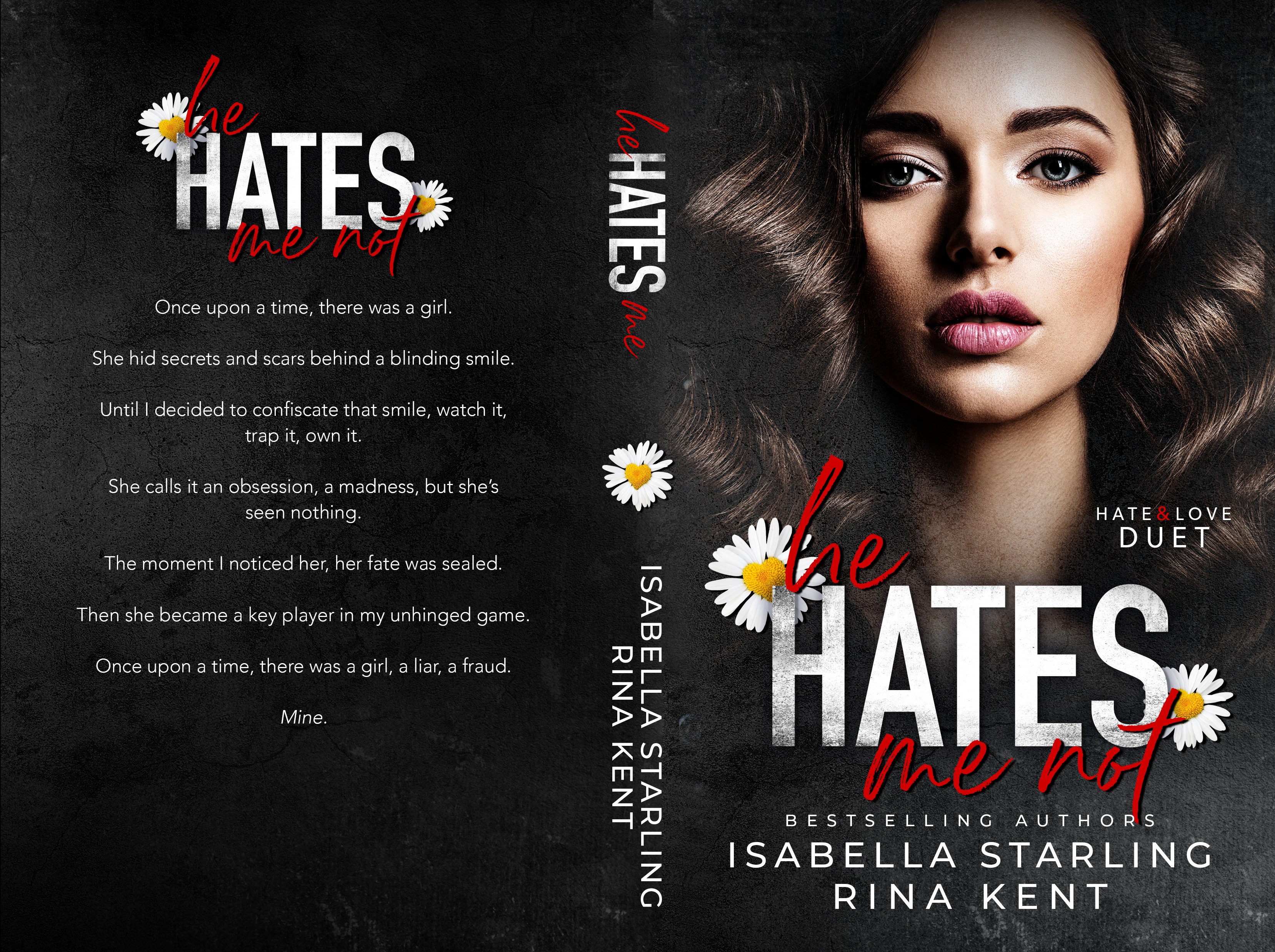 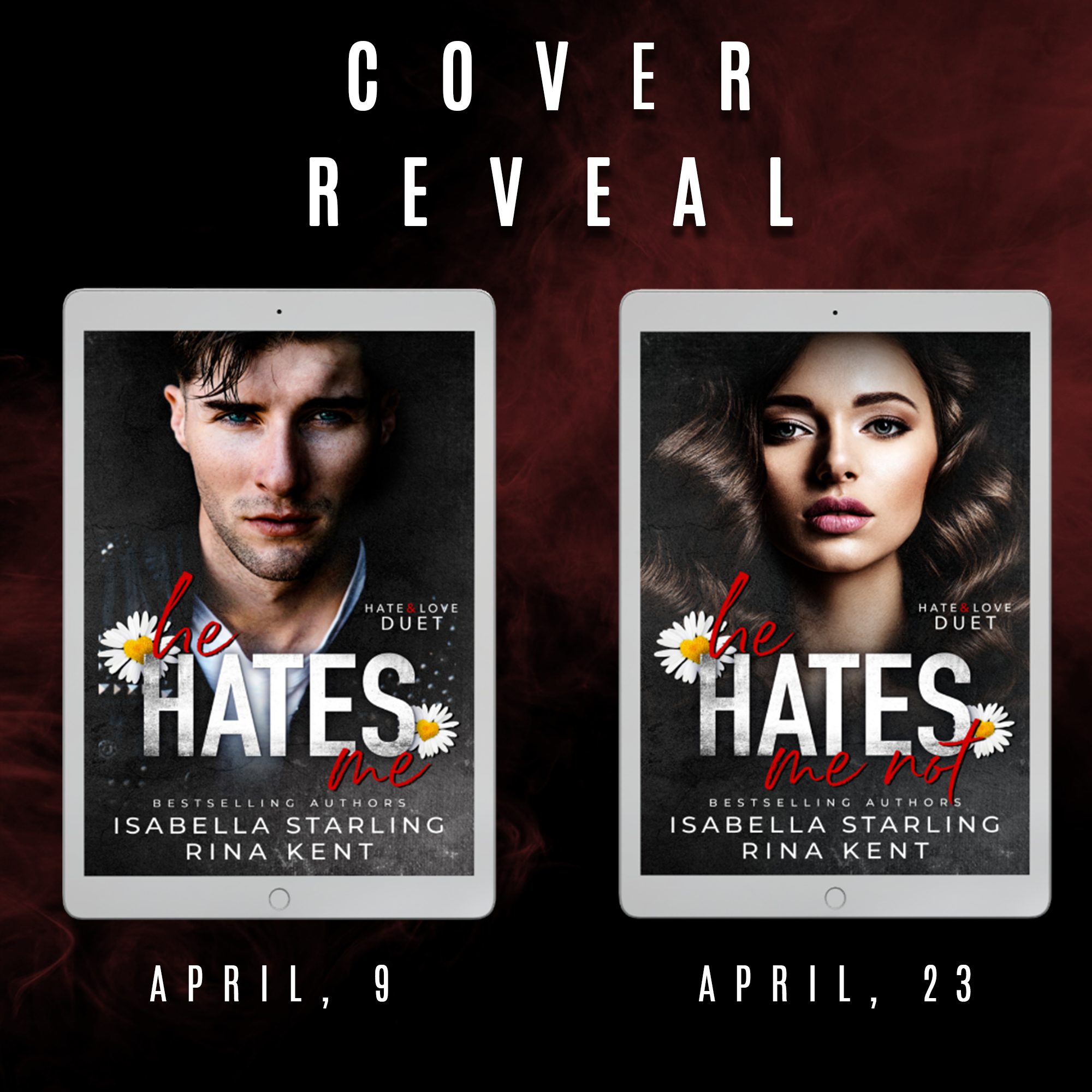 Rina Kent is an international bestselling author of everything enemies to lovers romance. Darkness is her playground, suspense is her best friend, and twists are her brain’s food. However, she likes to think she’s a romantic at heart in some way, so don’t kill her hopes just yet. Her heroes are anti-heroes and villains because she was always the weirdo who fell in love with the guys no one roots for. Her books are sprinkled with a touch of mystery, a healthy dose of angst, a pinch of violence, and lots of intense passion. Rina spends her private days in a peaceful town in North Africa daydreaming about the next plot idea or laughing like an evil mastermind when those ideas come together. Don’t forget to Sign up to Rina Kent’s Newsletter for news about future releases and an exclusive gift.
AUTHOR LINKS
Isabella Starling Social Media:
Facebook Page: https://www.facebook.com/authorisabellastarling
Facebook Profile: https://www.facebook.com/isastarling
Facebook Group: https://www.facebook.com/groups/goodgirlslovebadboys/
Twitter: https://twitter.com/authorstarling
Instagram: https://www.instagram.com/authorisabellastarling/
BookBub: https://www.bookbub.com/profile/isabella-starling
Amazon: https://www.amazon.com/Isabella-Starling/e/B01HK6XGZW/
Book+Main: https://bookandmainbites.com/users/45
Goodreads: https://www.goodreads.com/author/show/15291934.Isabella_Starling
Newsletter: http://www.subscribepage.com/isabellastarling